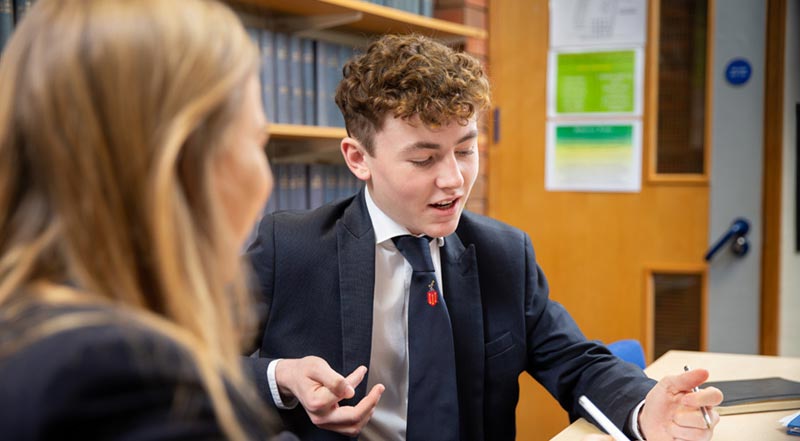 The Philosophy, Religion and Ethics course aims to give students insight into the world around them, and introduce them to important thinking skills and ideas. Alongside studying the six major world religious traditions, students are introduced to key concepts within Philosophy, as well as being given the opportunity to evaluate core ethical issues and ideas in the modern world. Alongside this, pupils are encouraged to explore their own spirituality and identity, and reflect on their own ideas about life.

Although we have been successful in obtaining top examination results at GCSE and A Level, the main focus of the PRE department is on the personal and spiritual development of every individual within the school.

We have a suite of three dedicated teaching rooms in the school which include a number of computers. The A Level teaching room is small and intimate with a seminar style lay out, making it ideal for the discussions so central to A level classes.

At Key Stage 3 pupils receive two lessons in Year 7, one in Year 8 and two in Year 9. We also deliver our Spirituality and Ethics curriculum to all pupils in Year 11 for one lesson per week. Students also have the option of a two-year GCSE RS course involving three lessons per week. We have two sets in Year 10 and two sets in Year 11. Sixth Form pupils can choose to study Religious Studies at A Level.

Pupils follow a lively and varied curriculum with a thematic approach.  This includes:

A Level – Students currently follow the Eduqas specification. This comprises one unit focusing on Philosophy, one unit on Ethics and one unit looking at Christianity in the modern world.  In Philosophy, students study a variety of different topics, including the Philosophy of Language, arguments for and challenges to the existence of God, as well as the psychology of religion and religious experiences.  In Ethics, students study a variety of religious and non-religious ethical systems, including Utilitarianism and Virtue Ethics, and apply these to a number of contemporary issues such as euthanasia and sexuality, as well as considering the ideas surrounding free will.  In Christianity, students look at the theology and phenomenology of Christianity in the modern world, including different interpretations of scripture and the ways in which Christianity responds to challenges such as secularisation.

We regularly lead trips out into the local area to examine and record the school neighbourhood. Photographers in particular are encouraged to explore the school site and nearby parks and streets to seek inspiration.

Of course we also venture further afield to broaden our pupils’ horizons. Recent trips have included visits to galleries in London and to the stunning grounds and galleries of Compton Verney in Warwickshire.