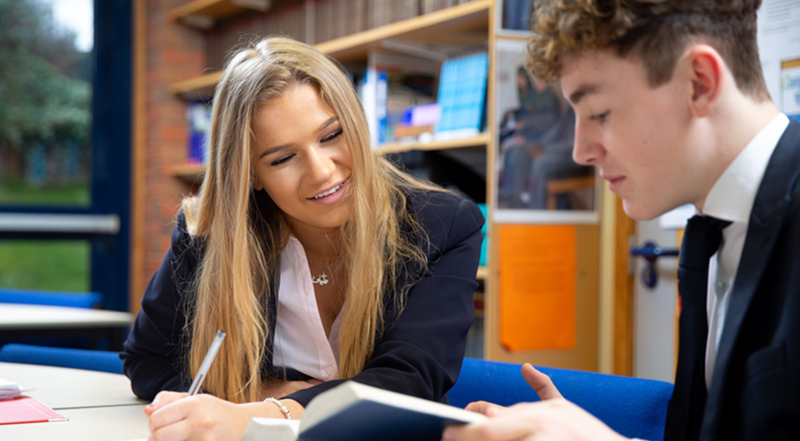 To study Law is to analyse some of the fundamental mechanisms through which our society is governed, regulated and supported. It is a fascinating journey through which you will develop the highly transferable skills of legal scholarship: logical analysis, critical evaluation, precision and clarity of expression. Not only will you benefit from the intellectual rigour of the subject but you will also find that your awareness of the world around you will deepen as you begin to appreciate the incredible, invisible web of law that surrounds us all.

Law lessons take place in the King Henry VIII Law Library which is located in the Sixth Form Centre. This is probably the only school Law Library in the country. Our holdings include the All England Law Reports, Halsbury’s Laws and Halsbury’s Statutes. We also have an extensive range of wider reading material, including undergraduate level texts and journals. The Law department subscribes to a comprehensive online resource called Elawstudent which provides lectures, case transcripts and links to audio and visual resources.

We begin by examining the mechanics of the legal system, investigating criminal and civil process and the roles of legal professionals such as judges, barristers and solicitors. We also look at the role of lay people such as magistrates and juries, and at the principles behind sentencing policy.

Students then study the different ways in which the law is made; by Parliament, the courts and through powers delegated to ministers, local authorities and other bodies.

Three areas of substantive law are then studied. First we tackle Criminal Law, looking at the foundations of criminal law and then moving on to fatal and non-fatal offences against the person, offences against property and general defences. We then look at Tort Law, including negligence, occupiers’ liability and the law of nuisance. The third area of substantive law is Contract Law and students learn about the formation of a contract, contractual terms, breach and remedies. In each of these three areas students learn to apply the law to given situations using case and statutory authority to support their decisions. They also evaluate the law.

Finally, some broader questions of legal theory are tackled, including issues of justice and morality. Students make use of their knowledge from other parts of the syllabus to synthesise answers to this synoptic unit.

We also offer the co-curricular club: the Law, Politics and Economics Society, which is aimed to allow students to explore areas of those subjects outside the confines of the curriculum. We have run mock general elections and trials, discussed issues such as Brexit and had a range of visiting speakers, including circuit judge.

If you have any questions please contact Mr Lovell by emailing: lovelld@khviii.net