In 1972, King Henry VIII School started a boys’ six-leg Cross Country race in Coventry’s War Memorial Park, just across the road from our school site near the centre of the city. Since then a girls’ event has been added, and the course has been ran over 14,000 times in the last 50 years by pupils from hundreds of schools in the UK and beyond.

The race founder, Classics master Mr Ted Norrish, had established the school’s orienteering club a few years previously, as well as organising the first Coventry City Marathon. Ted saw there was a desire for a nationwide schools event, and that Coventry—and King Henry VIII School—was perfectly placed to satisfy this need.

Held on 26th January 1972, the first race attracted teams from 32 schools, running the 2.4 mile route. Local school Bishop Ullathorne won with a time of 74.53 mins, and schools from as far away as Liverpool, Cheltenham and Harrow travelled to compete in that inaugural event.

“…At the end of January, we made our longest journey ever for the first King Henry VIII Relay in Coventry. It attracted the best schools from all over the country, including Scotland and Northern Ireland. It became the top schools event in the UK, apart from the English Schools [Cup], and in later years occasionally teams came from abroad including the USA… despite the rainy day we all enjoyed competing. We finished 12th out of 32 teams.”

Dennis Orme, a Harrow student, present at that first race, and who also ran in later years.

This photo below gives a snap-shot of the race in 1976; in many ways it hasn’t changed that much! 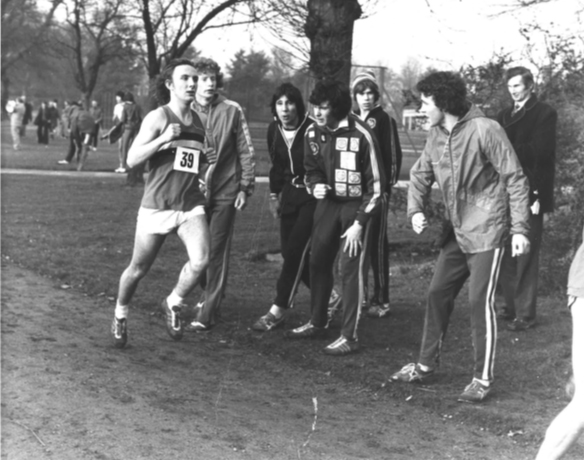 King Henry’s boys’ team won the event in 1985 – here is founder Ted Norrish with the victorious runners after a very successful season! 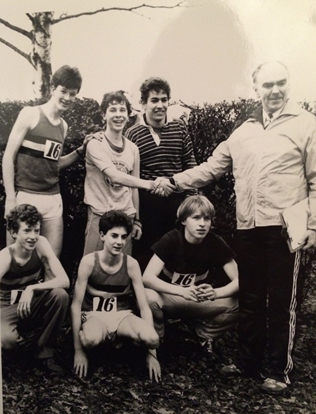 In 2000, Phil Mahiques started the girls’ race, and endowed the second-place team’s cup. A few girls had already been running in the event before this time, and so Phil formalised their competition with a race of their own—much to the delight of many schools! We only had ten girls’ teams in the first year, but word soon got out, and it is now very well attended; some schools, such as Millfield, focus solely on the girls’ race, bringing several teams with them to do so.

Archive of all results

We have complied an archive of all the results. Please click here to see all the listings from 1972 to present, including many of the programmes.

The impressive KHVIII Cups are awarded to the winning boys and girls teams. The boys’ cup was chosen by race founder Ted Norrish in 1972.

In the boys’ race the JB Vent Cup, LJ Wrench Cup and Matthew Lee Cup is awarded to the 2nd, 3rd and 4th placed teams. The John Vickers Cup will be awarded to the most improved boys’ team.

In the girls’ race the Philip Mahiques Cup is awarded to the second placed team, and the Pat Head Cup to the third placed girls’ team.

Embroidered badges will be presented to the members of the first ten teams of each race, as well as medals to the runners in the top 4 teams.

Individual plaques are awarded to the runners of the three fastest lap times for the boys’ and girls’ race. The fastest boy is awarded the Mark Randall Shield.

Here is a map of the course, which has been unchanged since 1991. 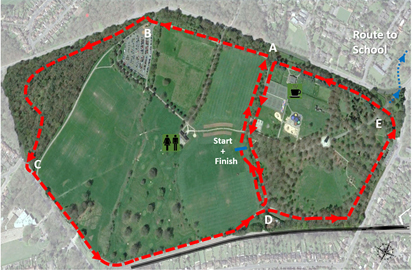